It will be a fairly busy day today. I have to sow some seeds in the aquaponics garden as well as some brandywine tomatoes for another garden we are making in the front yard. I have some ironing to do, there is a load of washing on at the moment, I will bake a cake and bread, get my notes, notebook, diary and bag ready to take to work tomorrow and later on I will pack the car with the new sewing kit, my sewing machine and some spare lemons I'll give away. I have to take my sewing machine as the new sewing machines didn't arrive at the place I bought the new ones. If I have time, I'll clean out a cupboard in the kitchen that is driving me nuts.
DH is replacing a fan belt on our old Asko washing machine. It cost $45 to replace the belt, which will probably keep the machine going for another 10 years. We have it on the back verandah attached to the water tank and we use it to wash the dogs bedding and other heavy things like mats and rugs. It saves the new washing machine from that heavy work, and hopefully both machines will keep working well for a long time. H will also clean out the chicken coop and wash the car and the dogs.
Yesterday H picked all the kale for a big German feast he wanted. I don't eat meat, he only eats it rarely, but he decided he needed some with the kale. One of the meals he loves from his childhood is Grunkohl und Schweine Wurst or kale and pork sausage, so that's what we both made. 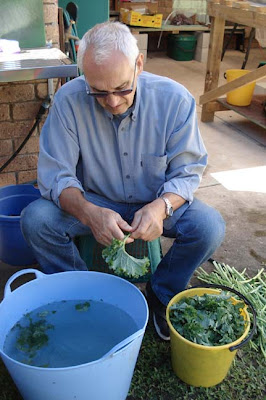 He picked the kale - see photo - and washed it, I cooked a ham hock in half water, half apple cider for an hour, then we added the chopped kale, two chopped onions, four tablespoons of rolled oats (to thicken it), salt and pepper. That cooked very slowly for 45 minites. About 30 minutes before it was ready I added three knackwurst. It was served with our homegrown kipfler potatoes, boiled. H was really pleased with it. There is enough there for two more meals for him. I'll make some soup or beans for myself, so tonight's meals will be a breeze.

If there is any spare time, I'll relax with some knitting. All in all it looks like a good day.
SHARE:
Written by Rhonda Jean