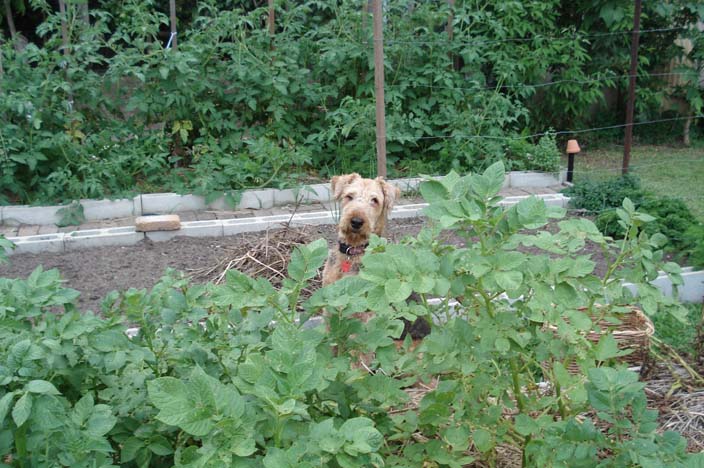 Every gardener needs an assistant, and I have Alice. She follows us around the garden and loves to eat fresh tomatoes and carrots, just picked. In the photo above, she was told to "sit", but she kept a sharp eye on me while I took photos. LOL She is behind the potatoes and in front of the tomatoes.

The garden is suffering from the neglect of the past two weeks. There are no major problems there but the general day to day business of removing dead leaves, collecting vegetables every afternoon and tidying up has made way for a busy week at my voluntary job and the kitchen renovations. Today we will put in the work to bring the garden back to being the productive patch we need and want it to be.

These purple heirloom eggplant well illustrate the lack of time spent out there over the past week. They're too big, turning green and would be terrible in a vegetable lasagna. The taste would still be there but they'd be rubbery and tough. I'll be using these for eggplant relish that I hope to make this afternoon. In a relish, all mashed up and combined with spices and onions, like most vegetables, they'll make a great relish and can be stored in the cupboard for eating later in the year. Waste not, want not. 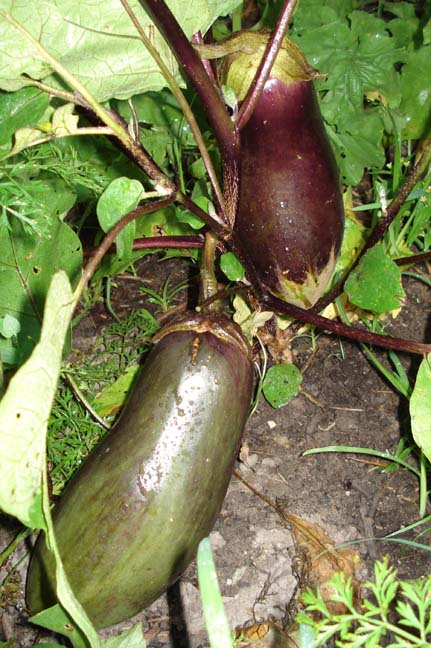 They'll be followed by these little sweet eggplant that will be perfect for eating next week. 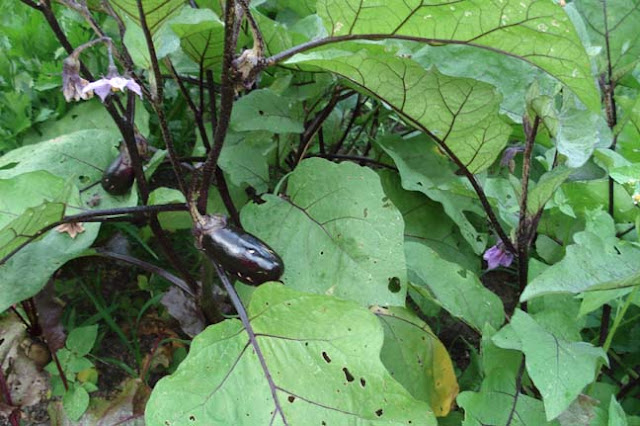 New eggplant are forming every day. 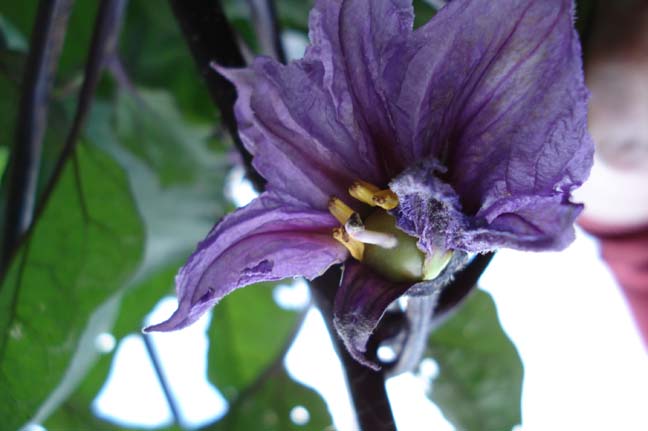 There is a wall of tomatoes out there too. I forget what type these are but they're one of the large heirlooms, possible beefsteak or mortgage lifter. The flowers are forming and soon I'll be able to tell with more certainty. One of my jobs today will be to tie these back as they're falling over themselves and are starting to grow along the ground. That's not good here as we do have problems with wilt.
We are also growing tomatoes in the aquaponics garden - there we have an heirloom dwarf red fig tomato and a couple of other smaller types. I intend preserving at least a dozen jars of tomato relish this year, recipe here. We enjoy that with salad, as a pizza base and on cheese sandwiches. I also hope to make up 10 or so jars of tomato sauce. The sauce I did last year matured to perfection and was a real treat on plain fresh pasta with a green salad. 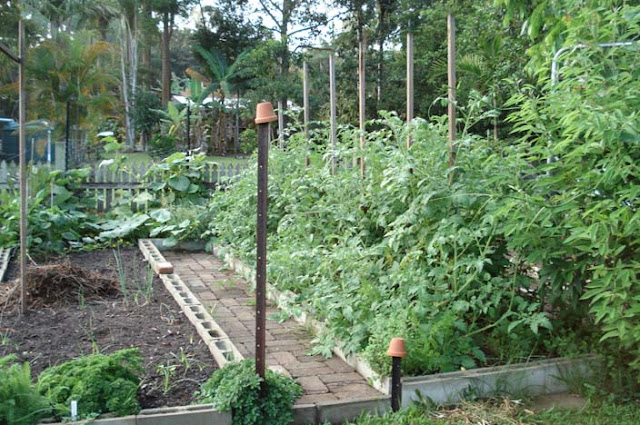 I love the following photo. This is a Lebanese cucumber that has fallen from its trellis and is dribbling along the ground. You can see that at every leaf junction there is a sweet juicy cucumber forming. That's great news in itself, but I have at least 30 cucumbers in the fridge, so when I make the eggplant relish I'll also use most of those cucumbers for bread and butter cucumbers. It's one of my regulars and you'll find a post about them, and the recipe, here. 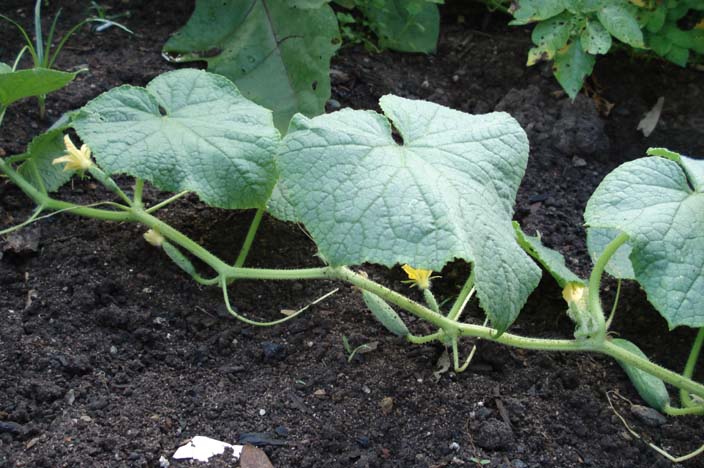 This is a better photo of the cucumber vines. They're mixed in happily with celery, eggplant and tomatoes. 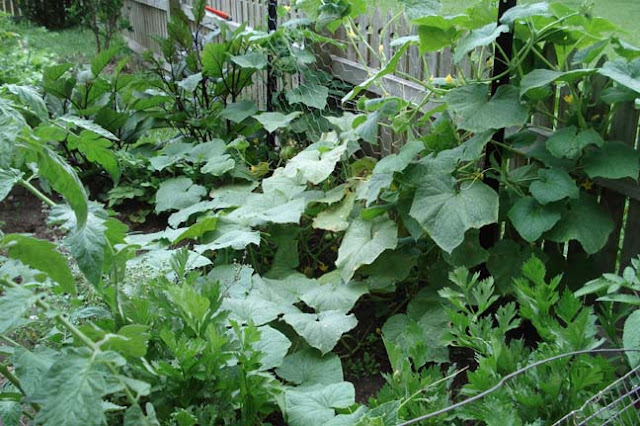 These yellow zucchinis are growing well now. These are the first fruit. We'll eat these as zucchini flower fritters, zucchini omelettes and souffles. 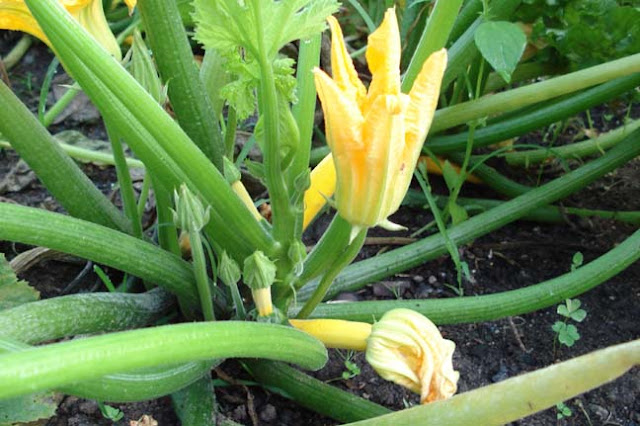 You can never have enough lemons. Thankfully the tree is full again and will produce well for the next nine months. I'll use the lemons for drinks, desserts and in general cooking - I often add a dash of lemon juice. 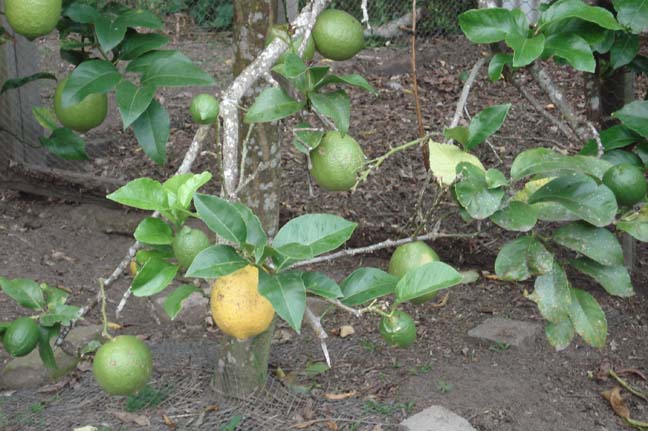 The green beans are almost finished and we've been enjoying their bounty in bean salad for the past few weeks. I've also blanched and frozen a few kilos in small batches. The photo below shows them tangled in with the choko vine - the little yellow flowers are choko flowers, which is producing its first fruit this season, and the pigeon peas which are flowering well after being cut back after harvest two months ago. 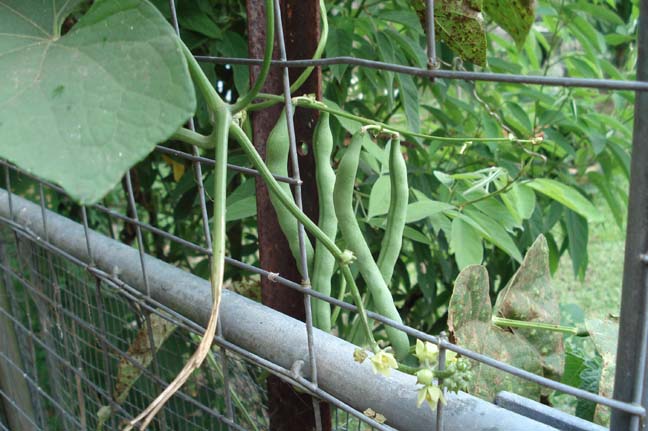 So now I'll have breakfast and get out in the garden before it gets too hot.
Thanks to everyone who comes here to read. I love getting your feedback in comments and emails. There has been a big jump in readers this week, so hello and welcome to all the new folk. I hope you enjoy your time here.
LATE ADDITION:
I've been asked for the eggplant relish recipe, so here it is:
Cut the eggplant into cubes, sprinkle about a teaspoon of salt over it and let it stand at least 30 minutes. After that time, rinse well under cold water to wash off the salt and allow to dry. This removes any bitterness from the older eggplants. Heat ¼ cup oil in a deep heavy skillet over medium-high heat. Add dry eggplant and cook until tender and golden. Remove and set aside. Add the garlic and onions and cook until softened. Add celery, tomatoes, peppers and eggplant and cook uncovered for about 15 minutes. Combine vinegar with sugar and add to vegetable mixture. Simmer uncovered for about 15 - 20 minutes or until mixture is thick and the flavors are well developed - add salt and pepper.
This will keep in the fridge, with no further processing, for about six weeks. To keep it longer, add the hot relish to warm clean jars, seal and place in a water bath. Bring to the boil and keep on 90 - 95C (194F) - 95C (203F) for 45 minutes. Remove jars from bath and allow to cool overnight before wiping and placing in the stockpile cupboard.
SHARE:
Written by Rhonda Jean