Officially, there are two days left before Autumn arrives in Australia.  The Autumn equinox is actually March 21,so we have a few hot days yet to come, nevertheless, we have begun our major planting of the year.  Where we live, it is much easier to garden organically during the cooler months.  Summer's heat brings many insects and diseases that we don't see when it's cooler.  Generally, we plant for nine months of the year, we harvest during Summer, and start all over again in Autumn. 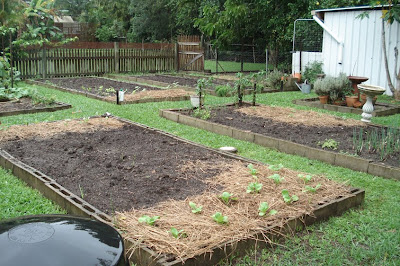 Starting over again always means ripping out the most of the plants still producing, like eggplant (aubergine) and pumpkins, and working around those that will continue on, like the capsicums (peppers) and sweet potato.   Hanno has worked hard on adding cow manure, compost and worm castings to the garden beds, it's been raining on and off for a couple of weeks, so the beds have settled again nicely, and now it's time for the first plants. 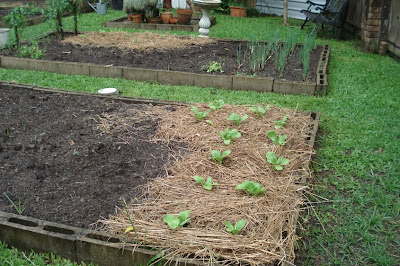 Bok choy is a staple here.  We use it in various stirfries and casseroles but the chooks eat most of it. 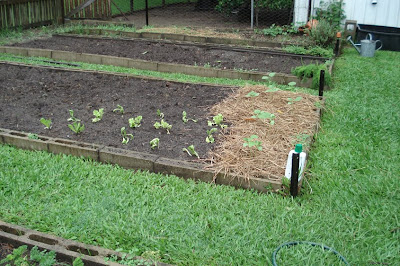 Further over in the part of the garden that will get sun all day we have cucumbers and lettuce.  The cucumbers, when they grow on their trellis, will partially shade the lettuce.
Most gardening books will tell you to rotate vegetables and plant those with the same requirements for water and feed in the same plot and although that is how we started out, that is not how we garden now.  We found long ago that if we are to produce food year round, many of the guidelines in gardening books don't mean much.  They are written for short season gardens.  We start off in a very organised way, but as soon as the first crops are harvested, and they don't often ripen at the same time, we fill in the empty spaces with other crops.  So where we started with, for instance, a row of tomatoes, we might end up with lettuces or radishes in the spaces when the tomatoes finish. 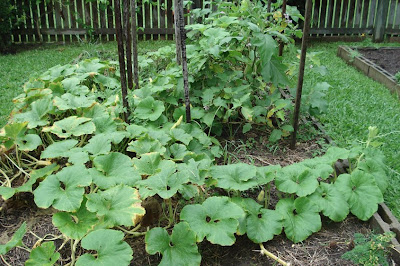 These pumpkins and eggplant have been growing over Summer and will soon be pulled out and composted. 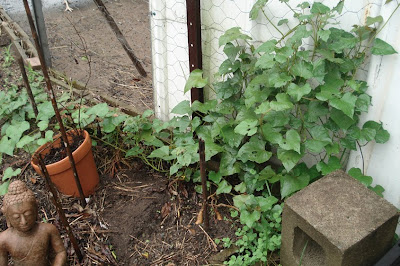 We planted sweet potato late last year.  This will grow for another couple of months.
There are only a few real rules we go by: we always grow the vegetables in excellent soil that is rejuvenated every year, they always have adequate sunlight, and we are very careful not to plant members of the solanacae family - tomatoes, eggplant, potatoes, capsicum (peppers), in the same soil two years in a row.  We also tend to keep these vegetables in groups and don't fill small spaces with one tomato or one potato.  If we keep them in groups, we know where they've been grown recently.  This family of vegetables are notorious for wilt diseases and soil nematodes and we need to plant them carefully to avoid problems. 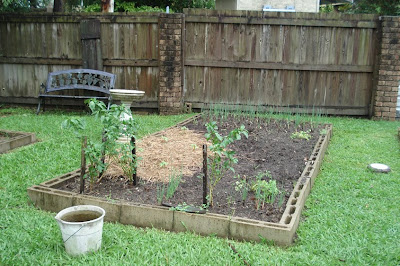 Capsicums (peppers) don't need to be replanted each year here, they will grow for three or four years and still produce well. Our capsicums are here with Welsh onions, the new pasley, tomatoes and garlic.
A couple of weeks ago I wrote about soil improvement  and when we improved our soil here we also started to sow seeds and plant cuttings.  Of course, this is an ongoing task throughout the year, but these and seedlings bought at the market, are what started our garden again. This year I have turmeric and ginger growing from tubers planted a few weeks ago.  They'll be planted out soon.  We also have seedlings of tomato, beans, cabbage, cucumber and bok choy, as well as new parsley, lemon mint, and coriander. 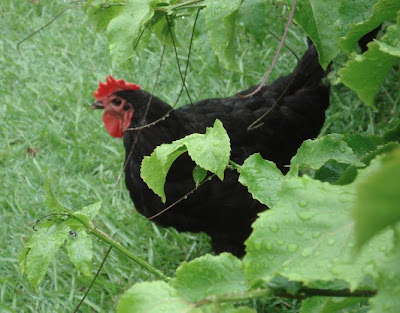 So our garden is planted again, albeit, with only a few seedlings, but it feels like we're back on track again.  In the coming weeks, the empty spaces will disappear and greenery will grow tall and overflow.  Trellises and climbing frames will be secured in the soil for cucumbers and peas; stakes will hold tomatoes steady and firm.  There will be all sorts of lettuces, ruby red tomatoes and radishes, dark purple cabbages and beetroot.  Soon we'll plant potatoes, carrots and baby cauliflowers for our Winter soups and vegetables.  Soon we'll be back to normal.
SHARE:
Written by Rhonda Jean