Trouble with the fish

We have been having terrible trouble with our aquaponics system and the fish have been dying. About two weeks ago we noticed the water going a revolting shade of pea green. The fish were fine but something was happening with the water. When it started getting worse, we changed the water. We put the fish back into the clean water, the next day is was brown. 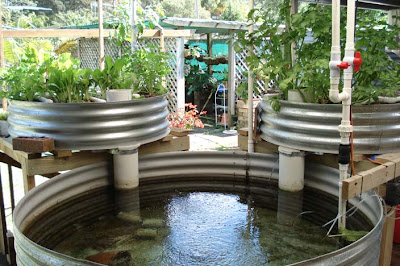 Our aquaponics system is made up of two grow beds that sit above a 3000 litre fish tank. One of the grow beds was cleaned out recently and replanted. When the water didn't improve, we changed it again. Luckily it's been raining a lot, and as we use only rain water in our system, we had the tanks replenished every night.

But replacing the water didn't improve the situation, so we ripped out all the plants and cleaned the second grow bed. It was full of green slime, roots and duck weed. This is an all day job that involved shovelling out the gravel, washing it in a sieve, placing it in the wheelbarrow and buckets, cleaning out the galvanised container and shovelling it all back in again. 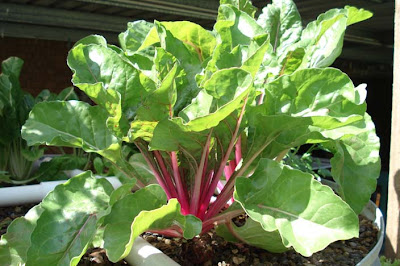 When we did that, there still wasn't much of an improvement so we changed the water again and waited. Overall, the water was changed three times and it's been every colour from bright green to a mid brown.

Every day a few fish died. It was horrible. I felt really bad that we had these fish and we didn't know enough to keep them alive and healthy. We did a lot of reading and realised the increased temperature and the afternoon summer sun on the water caused an algal bloom. The algae consumed a lot of the dissolved oxygen, and that is what made the fish sick. They didn't have enough oxygen, even though we had four bubblers running all the time and water was falling from the grow beds that created more bubbles. 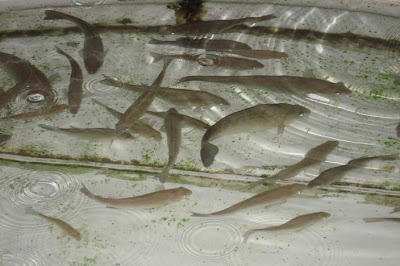 We now have a cover over the water to protect it and the fish from the sun. They like living in dark water so I think they're happier than they were when it was unprotected. Over the past two weeks we've gone from about 80 fish to around 50. Yesterday was the first day we had no fatalities. I think the balance has been restored. We've lost a few of the larger fish we were hoping to eat fairly soon. The largest of the fish that died was about 22cm (8½ inches).

So now we're starting from scratch again. We'll have to replant the grow beds and wait until the beneficial bacteria in the gravel starts growing again. Luckily it has been kick started with a couple of buckets of unwashed gravel. The bacteria converts the fish waste into nutrients for the plants.

My hope is that the fish remain healthy and we repeat the success with the plants that we had last year. The brandywine tomatoes we grew in the system last year were the best tomatoes I've even eaten - they were sweet and juicy and had that old-fashioned flavour of real tomato.

It's still too dark to see anything outside but if, when I go out, I find the fish well, I think we'll be over this horror session. This lesson has taught me there is still a lot to learn about aquaponics but I hope we can continue learning and provide a clean and healthy environment for our fish.