After all the hoopla, I didn't watch the apology. When it was being said, I was driving to the Centre, when it was streamed from the internet during the morning tea, I was on the phone and dealing with clients. : - (
The morning tea was a great success. About 30 people attended and everyone was moved by the speech and the coverage of the event. The Flexi students and teachers joined us and the kids helped with chairs and moving things around to accommodate everyone. I was really pleased with the kids. When I invited them I asked that they respect the importance of the day and the other people, and they did just that. When everyone was gone there were a few scones and biscuits left over so I told them to help themselves to the food and the last of the coffee. There is never leftover food or drink when there are teens around. 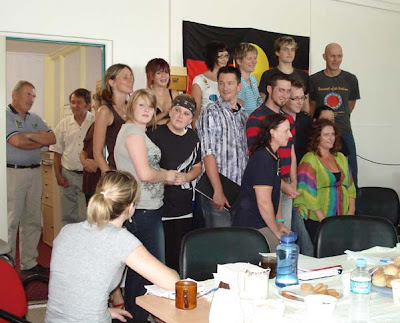 I had a few periods during the day when I could have watched the speech but I decided to save it for later. When I got home I saw some of it on the news and watched the rest on the internet and I was really pleased I waited to have the time to really take in what was said.

It was a very emotional day. The TV coverage of the event showed black and white Australians celebrating, embracing and quietly wiping away tears while they listened to the apology. It has made some truly wonderful promises - that the health, literacy and numeracy of indigenous Australians will improve, that indigenous life expectanacy will move closer to that of white Australians and that we, as a nation, will move towards reconciliation.

My family has lived in Australia since 1797 but I doubt any of my ancestors ever felt as proud of being Australian as I did yesterday when I heard that apology. And when I saw our Prime Minister welcome individual black Australians as they came to Parliament House with the words: hello, I'm Kevin, and a handshake or an embrace, I knew that I was watching something really significant happen.

There are times that we look back on, and with the benefit of hindsight, know that time was important. We don't need time to know that what happened in Australia yesterday was significant, decent, honest and long overdue. Along with all the tears, a lot of joy came from that apology and I believe we've been changed by it. I hope we remain as united as we are right now. As the first item of business in our new parliament, this set the tone for what will come, and I for one am very optimistic about what will follow.


Here is a part of Kevin Rudd's apology speech:


To the stolen generations, I say the following: as Prime Minister of Australia, I am sorry.

On behalf of the Government of Australia, I am sorry.

On behalf of the Parliament of Australia, I am sorry.

I offer you this apology without qualification.

We apologise for the hurt, the pain and suffering that we, the parliament, have caused you by the laws that previous parliaments have enacted.

We apologise for the indignity, the degradation and the humiliation these laws embodied.

We offer this apology to the mothers, the fathers, the brothers, the sisters, the families and the communities whose lives were ripped apart by the actions of successive governments under successive parliaments.

In making this apology, I would also like to speak personally to the members of the stolen generations and their families: to those here today, so many of you; to those listening across the nation - from Yuendumu, in the central west of the Northern Territory, to Yabara, in North Queensland, and to Pitjantjatjara in South Australia.

I know that, in offering this apology on behalf of the Government and the Parliament, there is nothing I can say today that can take away the pain you have suffered personally.

Whatever words I speak today, I cannot undo that.

Words alone are not that powerful; grief is a very personal thing.I ask those non-indigenous Australians listening today who may not fully understand why what we are doing is so important to imagine for a moment that this had happened to you.

I say to honourable members here present: imagine if this had happened to us. Imagine the crippling effect. Imagine how hard it would be to forgive.

My proposal is this: if the apology we extend today is accepted in the spirit of reconciliation, in which it is offered, we can today resolve together that there be a new beginning for Australia.

Let us resolve today to begin with the little children, a fitting place to start on this day of apology for the stolen generations.
Let us resolve over the next five years to have every indigenous four-year-old in a remote Aboriginal community enrolled in and attending a proper early childhood education centre or opportunity and engaged in proper pre-literacy and pre-numeracy programs.
Let us resolve to build new educational opportunities for these little ones, year by year, step by step, following the completion of their crucial pre-school year.
Let us resolve to use this systematic approach to build future educational opportunities for indigenous children to provide proper primary and preventive health care for the same children, to begin the task of rolling back the obscenity that we find today in infant mortality rates in remote indigenous communities up to four times higher than in othercommunities.
None of this will be easy. Most of it will be hard, very hard. But none of it is impossible, and all of it is achievable with clear goals, clear thinking, and by placing an absolute premium on respect, cooperation and mutual responsibility as the guiding principles of this new partnership on closing the gap.
The mood of the nation is for reconciliation now, between indigenous and non-indigenous Australians. The mood of the nation on indigenous policy and politics is now very simple.
The nation is calling on us, the politicians, to move beyond our infantile bickering, our point-scoring and our mindlessly partisan politics and to elevate this one core area of national responsibility to a rare position beyond the partisan divide.
Surely this is the unfulfilled spirit of the 1967 referendum. Surely, at least from this day forward, we should give it a go.
Let me take this one step further and take what some may see as a piece of political posturing and make a practical proposal to the opposition on this day, the first full sitting day of the new Parliament.
I said before the election that the nation needed a kind of war cabinet on parts of indigenous policy, because the challenges are too great and the consequences are too great to allow it all to become a political football, as it has been so often in the past.
I therefore propose a joint policy commission, to be led by the Leader of the Opposition and me, with a mandate to develop and implement, to begin with, an effective housing strategy for remote communities over the next five years.

It will be consistent with the Government's policy framework, a new partnership for closing the gap. If this commission operates well, I then propose that it work on the further task of constitutional recognition of the first Australians, consistent with the longstanding platform commitments of my party and the pre-election position of the opposition.
This would probably be desirable in any event because, unless such a proposition were absolutely bipartisan, it would fail at a referendum. As I have said before, the time has come for new approaches to enduring problems.
Working constructively together on such defined projects would, I believe, meet with the support of the nation. It is time for fresh ideas to fashion the nation's future.
Mr Speaker, today the Parliament has come together to right a great wrong. We have come together to deal with the past so that we might fully embrace the future. We have had sufficient audacity of faith to advance a pathway to that future, with arms extended rather than with fists still clenched.
So let us seize the day. Let it not become a moment of mere sentimental reflection.
Let us take it with both hands and allow this day, this day of national reconciliation, to become one of those rare moments in which we might just be able to transform the way in which the nation thinks about itself, whereby the injustice administered to the stolen generations in the name of these, our parliaments, causes all of us to reappraise, at the deepest level of our beliefs, the real possibility of reconciliation writ large: reconciliation across all indigenous Australia; reconciliation across the entire history of the often bloody encounter between those who emerged from the Dreamtime a thousand generations ago and those who, like me, came across the seas only yesterday; reconciliation which opens up whole new possibilities for the future.
It is for the nation to bring the first two centuries of our settled history to a close, as we begin a new chapter. We embrace with pride, admiration and awe these great and ancient cultures we are truly blessed to have among us cultures that provide a unique, uninterrupted human thread linking our Australian continent to the most ancient prehistory of our planet.
Growing from this new respect, we see our indigenous brothers and sisters with fresh eyes, with new eyes, and we have our minds wide open as to how we might tackle, together, the great practical challenges that indigenous Australia faces in the future.
Let us turn this page together: indigenous and non-indigenous Australians, government and opposition, Commonwealth and state, and write this new chapter in our nation's story together.
First Australians, First Fleeters, and those who first took the oath of allegiance just a few weeks ago. Let's grasp this opportunity to craft a new future for this great land: Australia. I commend the motion to the House.