There is no kitchen here, no floor either. These vital parts of our home should have been installed last Monday and Tuesday but the kitchen is still echoing when sound bounces off bare walls and the cement slab. Nothing has been done.

The workers arrived last Monday, ripped up the old floor and discovered water under it. Work stopped while we had a dehumidifier dry out the slab. The slab dried and the workers returned on Thursday to lay the floor. Worked stopped immediately when they discovered the new floor boards were too big to fit into the ones still on our lounge room floor. They contacted the insurance assessor and were told to wait until the insurance company gave approval to have the entire floor done. We got that approval late yesterday. Now we have to try to fit into the schedules of both the floor and kitchen people. We also have to move everything out of the lounge room, which includes moving my computer. Sigh. 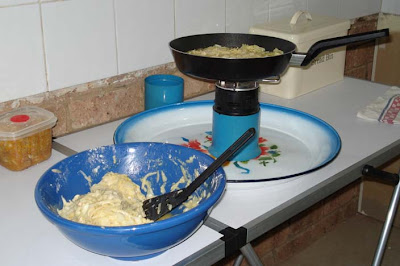 It's been an interesting week. Hanno has set up a makeshift kitchen for me where we have a pottery crock full of filtered water, a camp stove, electric frypan, toaster, electric kettle and a bucket. The microwave and fridge are in the lounge room, I'm washing my hands and washing up in the laundry, all the non-refrigerated food is in one of the bedrooms. We've been eating bread from the baker but I've made our other meals here, apart from a cheap vegetarian pizza last Tuesday. 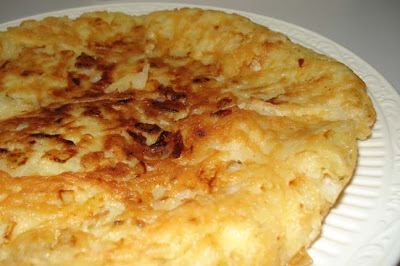 Above is a potato pancake (Kartoffelpuffer) that we had the other night.

Kartoffelpuffer - enough for three people, or one person and a Hanno ; )
Grate (on a cheese grater) six med - large potatoes and finely chop two medium onions. Mix these together in a large bowl and add two eggs, salt and pepper and four tablespoons self raising flour (or plain or all purpose flour with a teaspoon of baking powder) .

Cook in a fairly hot frying pan in olive oil until golden brown. You can make several small circle ones or fill the whole pan then cut wedges to serve. It's delicious served with a salad.

This has shown
me how much we rely on the modern conveniences we all have in our homes. I used to think we'd gone back to basics, but we haven't. We're just playing at it. I've been working on my quilt during the past week and that's been a gift. It's allowed me to stay calm and relaxed, except at those times we were told of each delay. Then I let Hanno and the insurance man have it. LOL But overall it's just been a process of working through each day and not focusing on the negative. There are positives here too. I've been able to reorganise my kitchen to how I work now and when it goes back in, although it will look similar, it will be a better place in which to work.

There is no doubt that this has been a big upheaval, but every day, bit by bit, I've been working in my home as I usually do. Tea is still being taken on the front verandah most mornings, we eat well every night, we are still happy and smiling, and I know that I have little to complain about.
SHARE:
Written by Rhonda Jean