Growing food for the non-gardener

Everyone should taste produce they've grown themselves at some point in their life. It's a skill we should all have - that ability to plant a seed, seedling, vine or tree, manage it, watch it and eat it when the time it right. However, some people can't do it. They have either no time or they have no land. If you're in that group of people because you're either out at work during daylight hours and have no energy when you're home, you're raising a young family or looking after an elderly relative, or you simply just don't have the land because you're renting, I might have a solution.

My solution won't give you an abundance of food, nor will it allow you to give up shopping for fresh food at the market. What it will do though, is allow you to grow one thing well so you can experience the taste of real food and start to develop food growing skills. 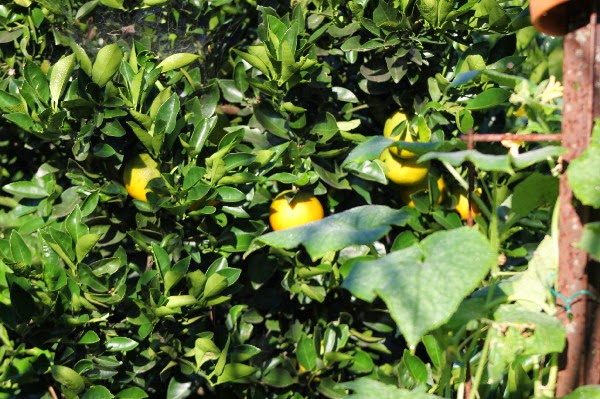 This project can be carried out indoors or out in the backyard. The options are, outside, to plant a fruit tree or vine or, inside, to grow mini salad lettuce. If you're renting and you're going to plant the fruit tree, you may need to ask your landlord for permission to do this. Once you've got that, you're set. Most landlords, even those opposed to a garden going in, would probably be okay with a tree of suitable size. But there will be some readers who own their own land but haven't yet fully utilised its opportunities. Please include yourself in this. 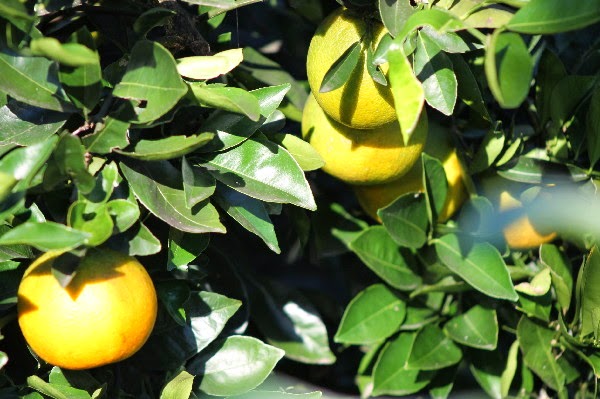 Hanno and I travelled to Germany in the late 1970s so I could meet his family. We intended to stay for a couple of months but ended up staying a couple of years. I often went food shopping by myself, and although I went to German language classes, I picked up a better understanding of the language when I was out shopping. One day I bought some peaches from Greece. Unlike Australia at that time they imported food from other countries and it was really interesting to me to taste these fruits. Those peaches from Greece were the best I'd ever tasted and I was convinced that it was the climate there, coupled with the soil the peach tree grew in that made this magnificent and remarkable difference in taste.

And then I grew peaches here in our backyard and I knew then that the mysterious element was time. Many fruits and vegetables grown now don't taste of much at all. Tomatoes don't taste like tomatoes, apples are bland and don't taste like they used to. I think that's because they're grown fast, usually fed with all sorts of man-made fertilisers and then they're stored. They grow true to the look they should have, true to the smell, they feel the same, but they do not taste the same. They've lost the taste of real food. When we grew our peaches, they started off small but even then they had the most delicious, intense peach aroma and flavour. Our tree grew in the middle of the vegetable garden and it was watered when the vegetables were and fertilised with comfrey. Those harvests, wow, they were magnificent. It was like we were eating the sweetest, most carefully tendered peaches, sold at the best shop in town. But the truth was we had tendered them in our little backyard, along with all the other food we ate. We gave it no special treatment, no extra water; it was just allowed to grow at its own pace and to develop the unique and extraordinary flavour of traditionally-grown, organic peaches. Sadly we pulled out that tree when the fruit fly found us a few years later. 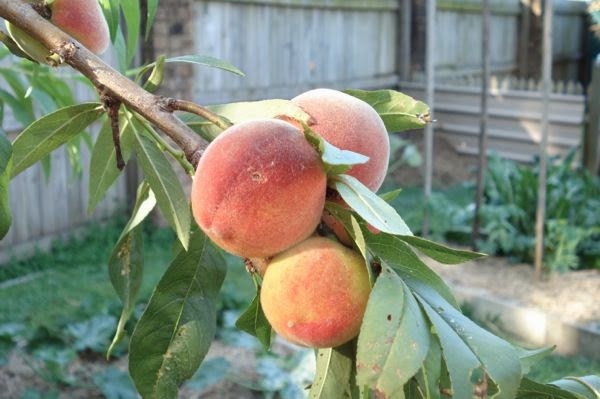 But now we have our oranges that the fruit fly don't bother with. Hanno was in the kitchen yesterday while I was writing and in he came with a slice of orange - "taste this," he said.  Well, it was like the peaches all over again - that intense orange flavour that commercial oranges don't have. That orange was perfect, although it didn't look like much. It was still tinged with green on the top of the orange, it had a couple of bumps, but that flavour, the flavour of a sun-soaked, organic orange was there to make us forget all about the look and just remember that taste. 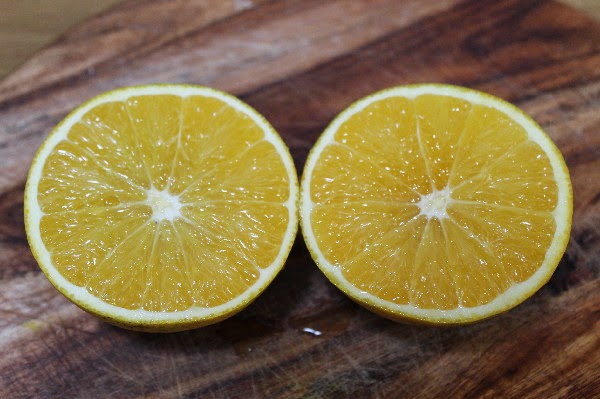 So if you have room and the right climate I encourage you to plant an orange. You'll be growing some of your own food but the work required will be a small fraction of what you'd be doing if you had a vegetable garden. A tree is a real investment - unlike most vegetables that have to be resown every year, a tree will take a few years to start, then you'll have oranges galore. You'll still have to learn about what the orange tree needs to thrive, you'll have to water it - that's nothing. And then once a year, you'll get a crop of the sweetest oranges from your backyard. You will have produced fruit; real food. An orange tree needs an open sunny spot to grow, dig a large hole to plant it in, add compost and manure - both can be bought in bags at the produce or hardware store or at the garden centre. If there are any flowers on the tree when you plant it, snip them off. I know it seems counter-productive to do so but it will allow the tree to establish its roots in the first year instead of concentrating on producing fruit. Do it the second year too. After that it just needs fertilising with the manure a few times a year and a deep watering once a week, maybe a bucket full. When the flowers and fruit appear, increase the watering to two buckets a week.

Luckily it's not just an orange you'll be getting. With your oranges, as well as eating them fresh from the tree, you'll have juice, fruit for jam, flavouring for cakes, biscuits and your savoury dishes and if there is some left over, maybe a bottle or two of cordial.

We have a Washington navel orange tree - we have a couple of them and they're a good tree in any backyard. If your climate is too cold for citrus, or you don't like oranges, try a cold climate apricot, pear or apple. Grow what you love and what can be grown where you live but do give it a try. You'll be gardening and producing some of your own food but without the fussing of a vegetable garden. 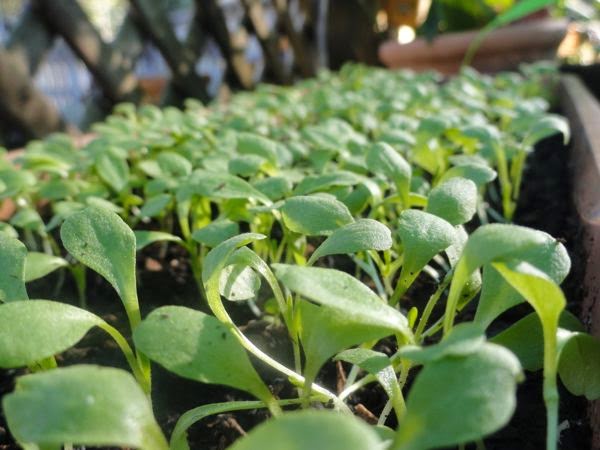 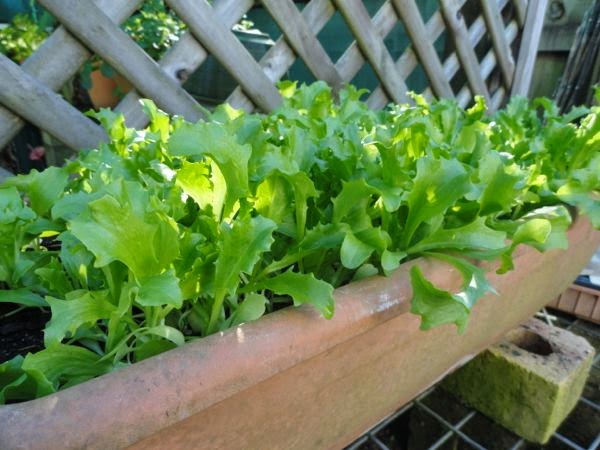 Just pull out these tender little lettuces when you have a salad and sow new seeds to replace them.

And if you have no room, time or permission, try the indoor option. Get a long trough pot, similar to those used as window boxes, fill it with potting mix and compost and plant lettuce seeds of your choice. Sit the pot on a warm window sill, or outdoors if the temperature is right. Lettuce need bright light to grow but they don't need full sun, so a light window sill would be perfect. You'll have to water them and care for them, and when they're two or three inches high, pull them out, cut off the roots and replace those you pull out with a new line of seeds to continue the lettuce throughout the season.  What you've have are little mini lettuces, with all the nutrition of a well grown organic lettuce, and it will be fresh. You can't buy freshness - you have to grow it yourself. But if you do this small project, not only will you be starting to learn abut food production, you'll be eating some of the best lettuce or oranges you've ever eat. And that is priceless.

What other ideas do you have to help non-gardeners with food growing skills?