I think most of us become more selective as we age. When I was younger I wanted to experience everything I could so I would know rather than surmise. I'm happy enough now to leave things I'm not interested in. The ability and the sense to do that came to me with age, although I think many people are like that all through life. Now, at this point in life I know that it would have been prudent to choose a husband who possessed skills that would compliment, and not duplicate, mine. If I were looking for a husband now, the colour of his eyes wouldn't matter, I would want to know if he could successfully raise an organic vegetable garden. Hindsight is a wonderful thing but the truth is I was rarely prudent in my younger years and when Hanno wandered into my life I never once thought of any of those practical considerations, I just loved him. I was more concerned with what was in his heart rather than in his bank account. 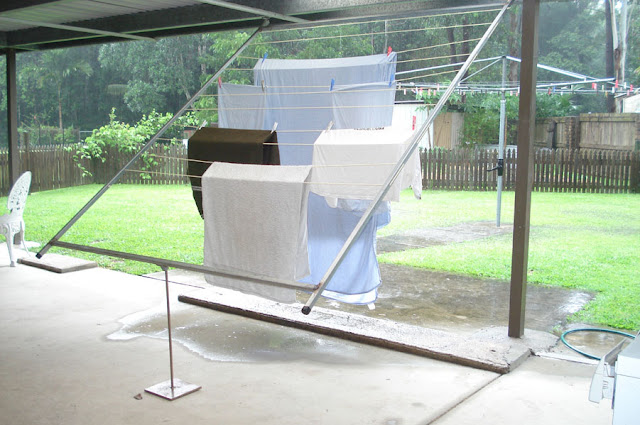 When I hang clothes or towels, the frame sits on its own legs. When I have sheets on the line, we use a little steel support to hold the line up a bit.

Now it's a bonus to me that he is multiskilled. Not only does he possess the skills of his former trade - mechanics, he can turn his hand to most things in the home. He can make furniture, repair the roof, rewire a lamp, unblock the plumbing, fix the car and cook delicious potato pancakes. I think I hit the jackpot. 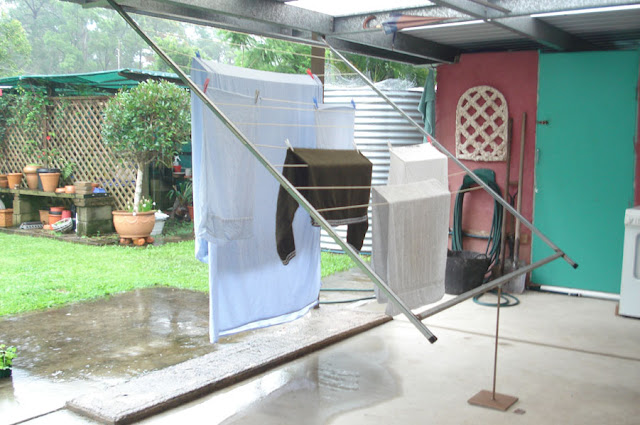 It just pulls down from the roof where it sits when not in use.

A while ago, I asked Hanno to make me an all weather washing line. I wanted something better than the rope line we had strung up on the back verandah. I wanted a line that I could use when it was raining, that was ready to go all the time but would be out of the way. I needed a line that I could reach without stretching and one that would hold a full load of washing. That was the brief - it's been delivered. 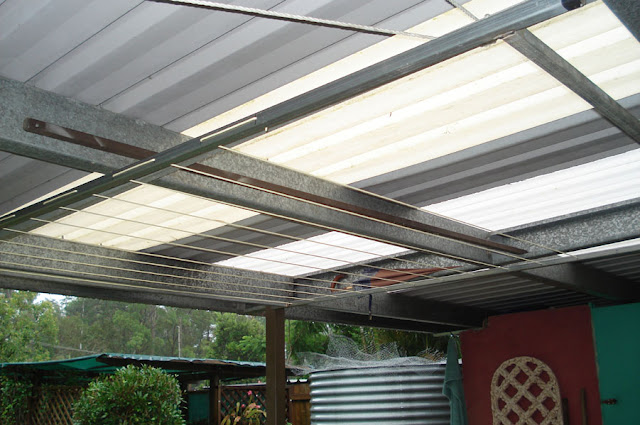 When the washing is dry, the frame is lifted up to the roof again, out of the way.

Even though it was some time ago that I asked for this washing line, Hanno did start working on it almost immediately. We settled on a steel frame that would be able to hold a full wash and last a long time but we had no way of welding the pieces together. Luckily for us, our neighbour John just bought a new welder. Hanno and John put the line together on the weekend and the ideal testing weather promptly arrived soon after. Five inches of rain fell yesterday, much less that what was predicted - 12 inches, but a real soaking nonetheless. I pulled the line down from where it is safely tucked away, pegged on the laundry and stood back to admire the scene. There are a few things that really improve with age, a capable husband is one of them. Thank you Hanno (and John).