Hot food on a cool day

I asked Hanno to buy some lamb neck chops for me last week and since then they've been sitting in the freezer ear-marked for Scotch broth. I made a thick version of it yesterday. I know it doesn't sound appetising but if we're not going to waste any part of the animals we slaughter for meat, neck chops must come into play at some point.  Lucky they are so delicious.  This is an old recipe I've been eating all my life. It's my mother's recipe but there is a very similar version in Maura Laverty's wonderful classic Irish cooking book, Full and Plenty. 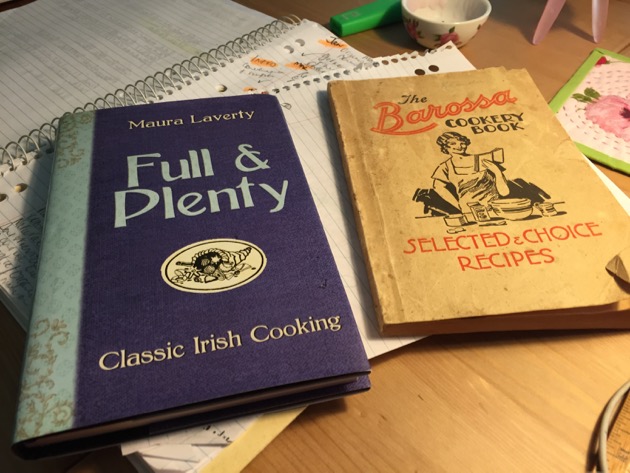 For two people, you'll need four neck chops. If you can't find neck chops, look for forequarter chops. There isn't much meat on each chop so if you're a big meat eater, you'll need more. Trim the fat off the chops and cut up your vegetables.
You can add other root vegetables such as swedes, turnip, parsnip if you want to. 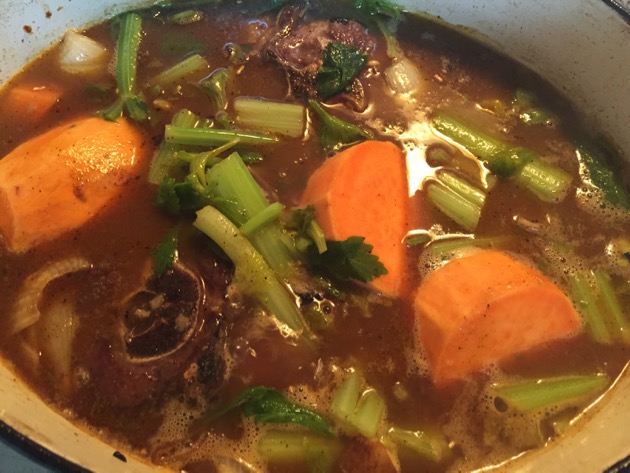 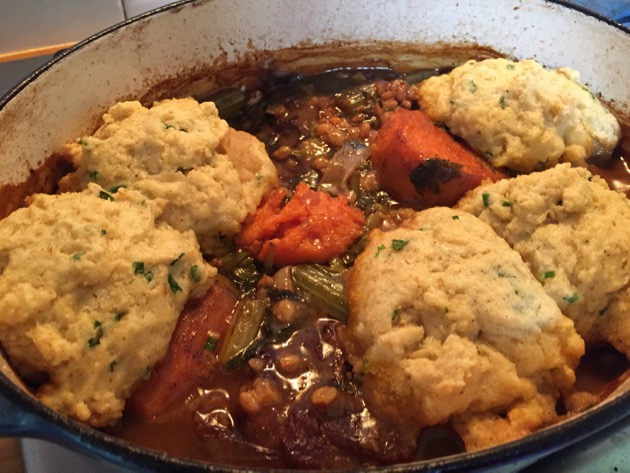 You'll need a cast iron Dutch oven. If you don't have one, start the cooking in a frying pan and transfer it all to an oven proof dish with a lid for slow cooking in the oven. Neck chops are one of the cheapest cuts of meat and usually have a bit of gristle and cartilage. Long slow cooking dissolves that part of the meat and you end up with meat falling off the bone and dissolved nutrients, such as glucosamine, in the broth. You don't have to bother about making stock for your sauce either. You'll cook the meat on the bone with a lot of vegetables so you'll make stock as you cook.

Add a small amount of oil to the pot on the stove and start cooking the lamb. When they've browned, add the vegetables and allow them to get some colour.  All the colour you add at this point is extra flavour in the finished dish. When you have a bit of colour on the meat and vegetables, add salt, pepper and the paprika. Then add the washed barley and pour in the water.

The barley will thicken the broth and the more you add, the thicker it will be. Don't go overboard because it soaks up a lot of water. Put the lid on the pot, bring it to the boil and then place it in a preheated oven on 160C for about two hours.  Test taste for seasoning and add more if it needs it.

A cheap alternative to serving this with potatoes is to make herb dumplings. They're delicious and go really well with all sorts of stews and soups. Men love dumplings and even though these chops don't have much meat on them, with the addition of the dumplings, it's filling and delicious.

To make dumplings:
Rub the butter into the flour, salt and pepper with your fingertips and when it looks like breadcrumbs, add the chopped herbs and enough water to make a moist but not wet dough.  Form the dough into balls and add to the broth in the last 20 minutes of cooking.

And that's it. A delicious and hearty meal for a very low price. I hope you try it.