I am always on the lookout for delicious thrifty meals that are fairly easy to make but in winter I keep coming back to this old standby that ticks all those boxes - split pea soup.  I think it's a favourite in many families but I thought I'd write about how I make it for anyone who hasn't discovered how to cook it entirely from scratch.
The key to most good food is good ingredients and this is no exception.  I start with a ham bone, this one bought on special after Christmas for $2, then I add two small packs (500g/1lb each) of split peas (one green and one yellow) $1.40 each and whatever vegetables from the garden or fridge I fancy.  I always use onions and carrots, for this soup I also used a celeriac root.  For additional flavouring, I added bay leaves and parsley from the garden.  So altogether, this soup cost me $3.40 for the ham bone and peas, and about three dollars for the onions, carrots and celeriac.  Add the cost of water, salt and pepper and gas to cook with, say 60 cents, and I'm up to $7.  This made up about 7 litres/quarts of soup, enough for Hanno and I for many days. 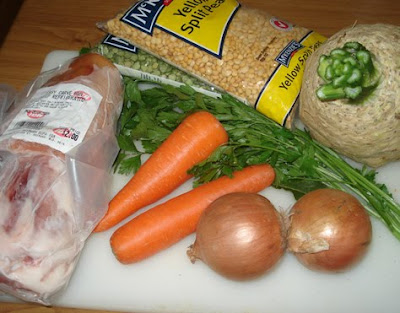 Assemble your ingredients.  If you don't have celeriac, use celery, which is more traditional.  The celeriac almost disintegrates in the soup and gives it a mild celery flavour. 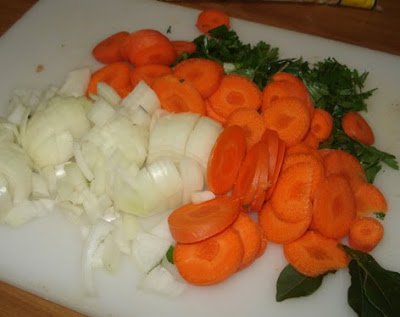 Chop the vegetables and herbs.  Leave the bay leaves whole. 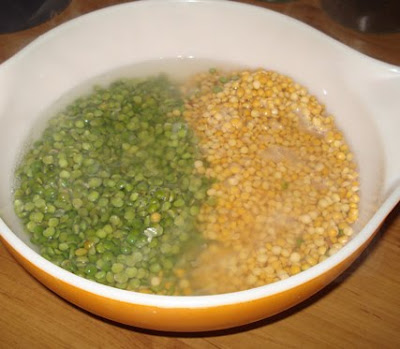 Place the peas in a large bowl and wash them in cold water, then pour boiling water over them and leave for a while. 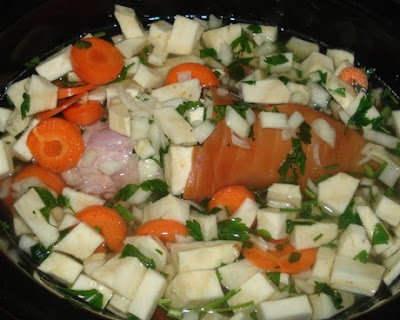 Place the chopped vegetables, herbs and ham bone in a large pot and fill with water. I used a large stockpot that holds about 9 litres/quarts.  Bring to the boil and allow to simmer for about 30 minutes. 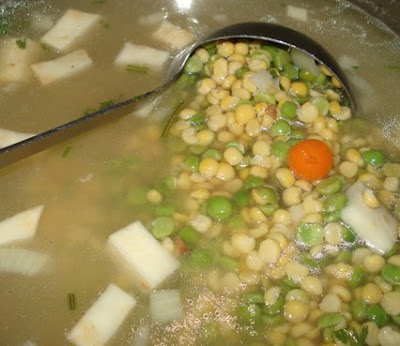 Add the peas and stir in.  Bring back to the boil and cook for about 2 hours on a slow heat.   It's ready when the meat falls off the ham bone. 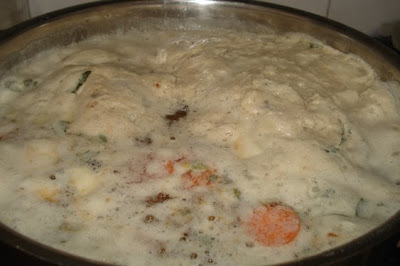 After you add the peas and boil them, you'll see scum rising to the top of the soup.  That's okay!  It's just the various starches from the peas - skim it off with your soup ladle. 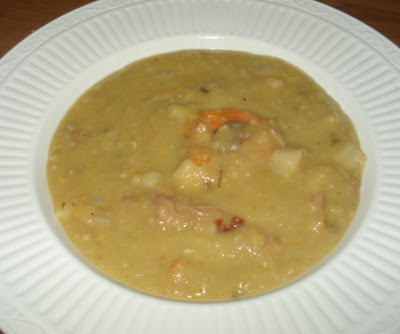 The soup is ready when the meat is tender and the vegetables cooked to your liking.  Personally, I like the vegetables to be mushy.  Let the soup cook a little, remove the ham bone and take the meat off the bone, chop it into pieces and return to the soup.  Remove the bay leaves.
This soup doesn't need pre-made stock, it makes its own stock as it cooks.  Add your seasoning right at the end.  Pork tends to need a fair bit of salt and pepper and although I add pepper, I don't add salt to the soup pot.  Hanno has high blood pressure so salt is a no no for him.  I add my own salt to my dish.  I do add croutons that I make just before serving by brushing two slices of bread with virgin olive oil .  I then cut the slices into small cubes and dry fry in a frying pan.  Another useful addition to bulk the soup out is to add smoked sausage/frankfurts cut into disks.  When served with a dessert of fruit and yoghurt or custard, we find this is a satisfying and warming dish that we both enjoy.
This is one of those soups that tastes better each day when you reheat it, but it also freezesd very well.
SHARE:
Written by Rhonda Jean