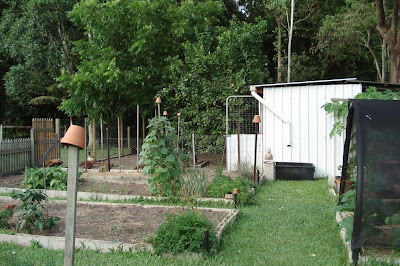 Yesterday started off just like any other day, I didn't know when I woke that it would become a day I'd remember all my life. I woke early, showered and wrote for an hour or two, then, when the sun was starting to come up, went outside, fed Alice, Hettie and the chooks and set about planting a few seeds. I like to get my outside jobs done before it gets hot. When Hanno woke, we had breakfast, and while munching on our toast, talked about what we'd plant in the garden this coming season and where to plant the newest passionfruit vine. Oh, the cricket was on too, we mentioned that and said we both should have our chores done so we could watch the cricket later; another normal day on the horizon. 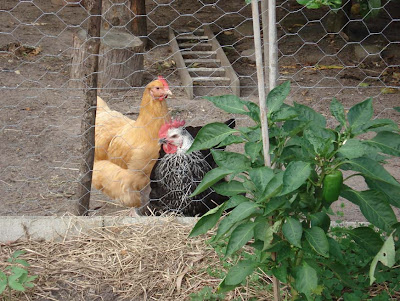 While I was outside, in that best of all lights before the sun came over the top of the house, I took these garden photos. It was coolish out there, I did some garden maintenance, and will write about that later in the week, talked to the girls who watched my every move, and thought about how today would be a good day because the cricket was on, I'd do some reading, knitting and odds and ends, and relax. Little did I know. 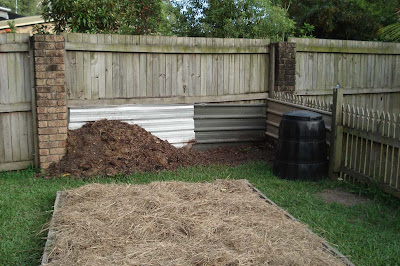 I noticed Hanno turned the compost heap the day before. We have a cold compost at the moment, with not enough material to generate any heat, but with moisture and turning, to incorporate air, it breaks down nicely. You can see the heap, and our compost area, in the photo above. In the foreground is the potato patch that was planted last week. Now it's under a cover of thick straw and I just know that little potatoes are preparing to send their shoots skyward. 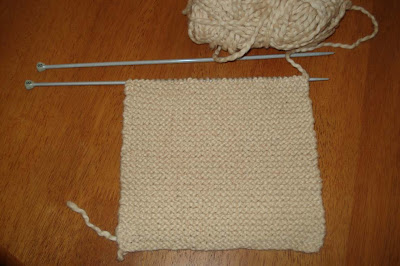 After morning tea on the front verandah, I checked to see what time the cricket would start. I looked online and discovered the match had started almost two hours before. Grrrrrrrrrr. So I turned on the telly, checked the score, and told Hanno the game had already started. He'd only done half the things he wanted to do before watching, so he came inside and sat with me for a short time, then went back outside to finish fixing a flyscreen on our bedroom. I, on the other hand, started knitting the back of a potholder. More on that in another post. (The yarn is Lions organic cotton.) 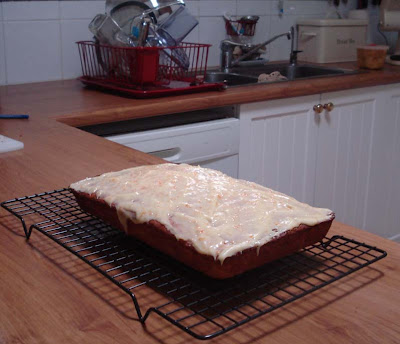 It sounds like I had a very slow day, and although I did to a certain extent, I also did a lot of work while listening to the match. I baked bread for lunch, and an orange buttermilk slab cake, and minced up some of the grass fed beef we've been buying to make a meatloaf, which we had for dinner last night. It was the first meatloaf I've eaten in ten years, and was not very good. I'm not sure if I need to make adjustments to the recipe or if my tastes have changed too much to enjoy it.

But during the afternoon, my step-son Jens came over to visit, I watched the cricket, did various chores in the house and generally enjoyed myself; we ended up winning by five runs. When the game was over, I prepared our meal - meatloaf, mashed potato and fresh coleslaw - and we were just finishing up, when Alice sprang to her feet and started barking. I looked out the front door and saw two people walking up the driveway - Shane and Sarndra had come to visit. Yipee!

They had driven up to celebrate the birthday of one of their friends. They were meeting everyone at a restaurant down on the beach but just had to come in to tell us something. "We have some news..." they said. "We're getting married!" I jumped up and hugged them both, feeling more happiness, joy and excitement than I thought possible, then listened quietly while they told us their plans. Shyly, Sarndra showed us her engagement ring, which is beautiful. I could barely contain myself. I wanted to, quite literally, tell the world this wonderful news. I am so pleased that Shane has found the right girl for him, they're so well suited and obviously love each other very much.

They both resigned from their jobs recently and have started making plans to go to New Zealand to live for a few months. A few weeks ago we agreed to take on their mother hen and chicks and Sarndra's cat, Princess, and we'll store all their possessions safely in one of our sheds. When they come home again, they probably marry then before travelling to Spain to live there for a while. Sarndra's father has a house in Spain and her grandma lives in New Zealand, so they'll have family in both countries. When they come back from Spain, they'll settle down and start a family.

So as you can see, our very ordinary day turned into something to remember. We started making plans to meet Sarndra's family, her mother and sisters live in Brisbane, and for an engagement party. They said they want a small and frugal wedding, preferring to save the money for travel and their futures together. Oh course I loved that idea and I know that whatever type of wedding ceremony they decide on will be truly wonderful. There are good times ahead, and we'll be there to help them every step of the way.