Stretching one meal into two

I have to admit to being out of my routine with Christmas holidays and working on my book every day. I returned to work this week, and was happy to be back. I'm looking forward to a year full of work, both at home and at the Centre, that will enrich my spirit and lead me gently along this path I'm on. It will be a busy year, I know that already, but I'm up for it, and as my mother would say when she was very busy, "I least I know I'm alive."

I haven't had a chance to take any photos lately, so I just looked back to see if there are any here that I haven't used yet. There are a lot that don't seem to go together, and maybe I'll just use them all together one day for a post about nothing - a Seinfeld post. However, there was one little beauty that shot out at me and suggested a post about leftovers and stretching food. A worthy subject for a blog such as this. 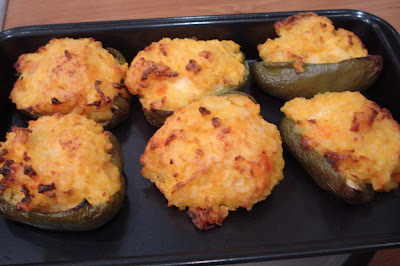 We often eat according to what is growing in the garden at any particular time. Recently, we harvested about eight golden nugget pumpkins. Some were smaller that normal and some slightly larger. For those who are not familiar with this pumpkin, it is a small variety that's usually about the size of a small rockmelon (cantaloupe). They don't form a vine and instead grow to full maturity on a small bush. Whenever I have a nice pumpkin, I make pumpkin risotto. So we had our pumpkin risotto for an evening meal and had some leftover.

The next day we harvested six green capsicums (peppers) so I used the leftover risotto to make another delicious meal - stuffed capsicums. There are never real recipes for leftover meals, you use your imagination and combine flavours you know your family will like. Don't worry that you've never seen a meal like the one you're making before. That's the beauty of it, you make it up as you go, and as long as your family enjoys it and eats up every last crumb, it's a success. So, to make up my stuffed caps, I washed the capsicums, cut them into two equal halves, scooped out the seeds and membranes and filled the little cups with a large spoon full of pumpkin risotto. There was already Parmesan cheese in the rice so I didn't have to add anything else. I put it in the oven for 20 minutes and out it came, all golden and crispy on the top. Delicious, easy, fast and frugal.

Stretching one meal into two is a great way to cut costs. Stretching food and eating leftovers was common back in our grandmothers' day and it can be used now by those people who are making the most of every dollar they have. I often cook knowing I will have enough for at least two meals for the two of us.

Do you have a little bit of corned or roast beef left over? Cook some potatoes, fry a finely diced onion, mash the potatoes, add the onion, cut up the beef into little cubes and add it, add an egg and salt and pepper. Form it into flat fritters and fry in hot oil until golden. They would serve you quite nicely with a fresh garden salad, or on a piece of homemade bread with a slice of tomato and lettuce.

What about that roast chicken you cooked yesterday. It's still got a little bit of meat on the bones, but not enough to serve four hungry people. No worries! Strip the meat from the bones and put it aside. Add the chicken bones to a pot of water, about 1.5 litres (quarts), add salt and pepper and whatever herbs you have, and a chopped onion. Bring to the boil and then turn down the heat and simmer for about 30 minutes. Look in the fridge and garden for some vegetables and chop up what you find - maybe a zucchini, celery, pumpkin or potato, green beans - whatever your family likes. Add these to the soup and cook for another 15 - 20 minutes. Five minutes before it's ready, add the chopped chicken meat. Test taste for seasoning.

A nice addition to any soup is herb dumplings. You would add dumplings just after you add the vegetables and the soup has returned to the boil.

Dumplings
2 cups of self raising flour OR 2 cups of plain flour with 2 teaspoons of baking powder added.
salt and pepper
Rub into the flour about two tablespoons of softish butter. Rub the butter in with your finger tips, just like you would when making scones (biscuits), until it resembles breadcrumbs.
Chopped parsley or chives
Add enough water to make a firm dough.
Forms small balls and drop them into the soup. The dumplings will cook on the top of the soup. They will take about 15 - 20 minutes to cook, so add then just after you add the vegies.