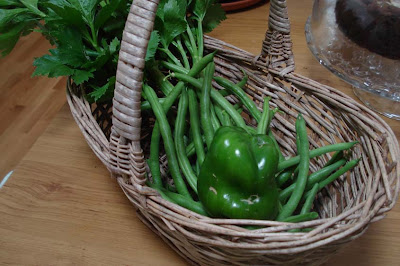 Vegetables - celery, beans and capsicum picked just before I cooked them last night.
It was late October when I wrote about the Nourishing Traditions book and adding meat back to our diet so I thought you might like a follow-up on how that is working for us. We are six weeks into it and we've eaten meat four times - one beef casserole and three beef casseroles with marrow bone. It's not really the time of year to be enjoying these types of meals but we have both enjoyed them and feel fine. I chose this type of meat because it's slow cooked and in doing that the sinews in the meat dissolve and release the natural gelatine. I want to eat more gelatine as it helps my damaged knee. 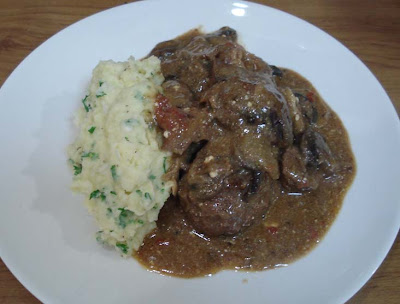 Hanno visited a few local butchers to find one who sells local grass fed meat. We found one close by who is quite happy to include the bone in or out of the meat we buy. He told Hanno to phone early in the week to order the meat and he'll make sure he prepares what we need. It's good service, isn't it, but you tend to get that from traders who are passionate about supplying local products.

Our intention is not to follow the Nourishing Traditions book to the letter but to add the things that make sense to us while we continue to eat the food we produce ourselves, supplemented by what we buy. 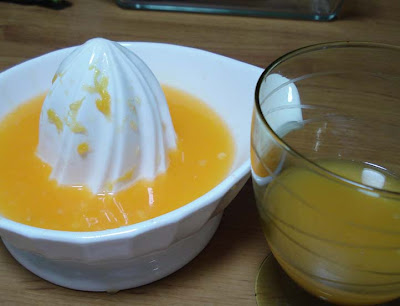 Our main drink now is filtered water - luckily we have a filter on our kitchen tap so that didn't mean any extra expense. I keep a glass jug of filtered water in the fridge, so it's ready to quench our thirst day or night. We have two cups of tea a day (breakfast and morning tea) made on filtered water and Hanno sometimes has a cup of coffee later in the day. I have been squeezing oranges for juice, although the book advises not to have too much juice, I won't give this up as it's my favourite drink. I never drink store bought juice. It's usually full of preservatives and colourings, or pasturised (heated), which removes a lot of the vitamins and minerals.

Last night's dinner was curried prawns cooked in coconut milk, with vegetables and brown rice. It was very tasty, even if I do say so myself. 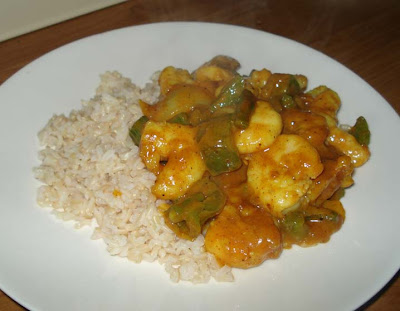 This is a very quick and simple meal. I added a small cup of rice to water, brought it to the boil and then turned down the heat. It simmered for one hour, brown rice takes longer to cook than white rice. Just before that hour was up, I chopped the vegetables, you can use any combination of vegetables you like, mine were all green yesterday but I generally have an assortment of colours. I fried the vegetables in a little olive oil, added two tablespoons of yellow curry paste, some pure sea salt and pepper and when they were almost cooked, added green prawns. 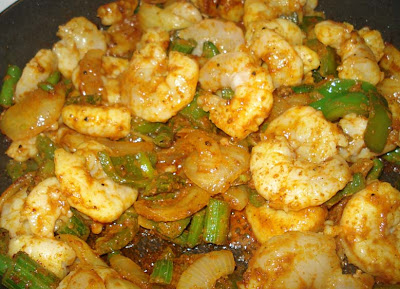 Add about a cup of coconut milk and let the meal simmer for about 3 minutes. Don't overcook it as it will make the prawns rubbery. If you like a thicker sauce, add a tablespoon of cornflour (cornstarch) to a some water in a cup, mix it, then add to the prawns. Cook this for another minute. Delicious! 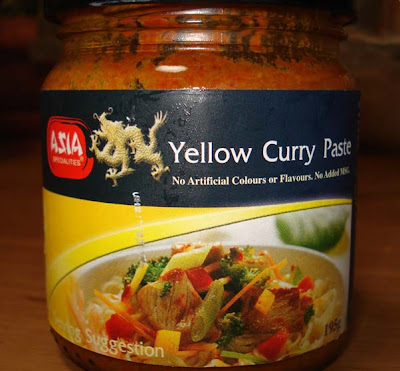 Yellow curry paste from Aldi, added for Gail.
We've stopped eating whole grains and now eat rye or wholemeal bread. Whole grains are difficult to digest unless they've been soaked overnight before cooking. When I use barley or oats now, I pre-soak them. You don't need to pre-soak rice, but when you eat rice, try to make it brown rice as it's much more nutritious than white rice. Oh, and while we still eat sprouted seeds, we've stopped eating alfalfa sprouts. Apparently they aren't good if you have an infammatory disease like arthritis or lupus.

So that's it! It's been a painless transition to a new way of eating. Many of the things we were already doing are recommended in the book so there haven't been any major upheavals, but we're both feeling good. And for Cathy, Alice is good too and she says "woof".

ADDITION: Sew Mama Sew is having a giveaway day, (some of them are not for international postage) so hurry over and check out all the blogs involved in this.