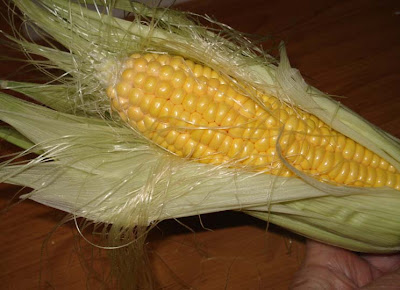 We have declared war on fruit fly, that summer pest we get here in Queensland but from recent reports has moved south to Melbourne. Those of you who have been reading here for a long time will know that we had a problem with fruit fly in the peaches and nectarines last summer, well, they returned worse than ever. We tried exclusion bags and saved quite a bit of our last season fruit; this year we have four peaches - everything else went to the chooks. Late last week we started finding fruit fly larvae in the tomatoes, cucumbers and zucchinis and a few capsicums (peppers).

We (meaning Hanno) cut down both trees. Now we've decided to delay planting any more soft fruit plants - like tomatoes and cucumbers etc. until we are sure the fruit fly problem is under control. To do less would be an exercise in futility.

Our second line of defence is to pour boiling water around the areas the two trees were planted - fruit fly larvae develop in the ground. If the trees were still there with fruit on the ground, we would put the chooks in there to clean up the area, but the ground is clear and looks clean. Hopefully the boiling water will kill any unseen eggs or larvae. Next we'll establish bait stations using Eco-Naturalure Fruit Fly Bait. It's very expensive but if it works, it will be worth it. I will buy a small container when I go to work today. 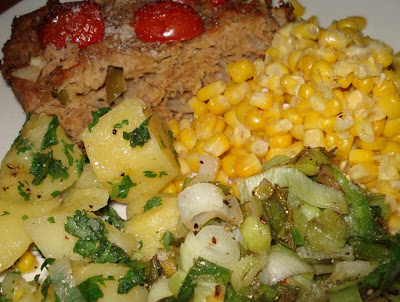 The above photo is of last night's dinner. Everything, except the tuna (from Aldi) and the flour that made the bread that made the breadcrumbs, was produced in our backyard. That includes the eggs in the tuna loaf, the Dutch cream potatoes, leeks, corn and herbs. We will not allow fruit fly to stop us eating organic vegetables. Luckily there are quite a few things not affected by this terrible pest - everything on that plate is immune.

It will be a real pain buying tomatoes that don't taste like tomato and watery cucumbers but we'll have to do it until we win the war. When you plant a vegetable garden you have to be prepared for those times when things don't go as planned. Things are always changing in the garden, sometimes, like now, those changes happen faster than you want them to. But not doing anything is not an option, that would only make the problem worse by allowing the fruit fry to multiply in the ground until next season.

Generally I'm a calm and peace loving pacifist but this is war!

Over the weekend we reached another milestone here - 700,000 visitors! That is amazing. I'm not quite sure why my blog is popular but I'd like to thank you all for reading, and a special thank you to all those readers who have been here for a long time. Knowing you're all there, reading the comments and developing friendships with some of you has made this a sweet, warm and rewarding part of my days. I appreciate your comments and thoughts and I hope you all stick around for a while yet. I still have a lot to say. (That last bit will be no surprise to Hanno.) LOL