Well, the first week of summer has been and gone and was marked in my traditional way - eating fresh yellow peaches. I think many of us mark the changing of the seasons with different foods and for me, everything about those first golden peaches says summer, heat, knitting and cricket. The heady aroma, the sight of peaches sitting in a bowl, the temptation to buy a tray of them and make peach jam. It's all there to tell me that Christmas is on the way and for the next three months there will be peaches to enjoy. 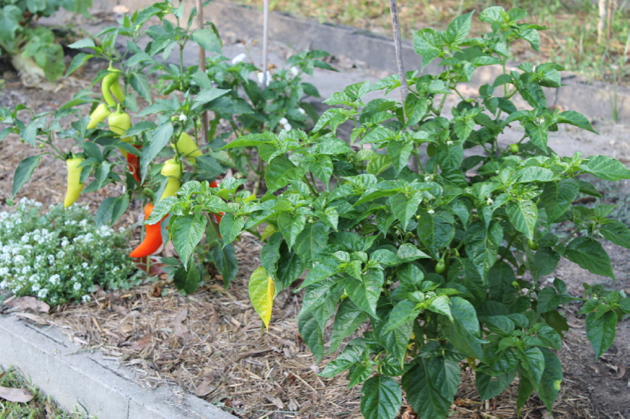 These chillies are the extremely hot and small Trinidad Scorpion and next to them and below, the mild large yellow Hungarian wax pepper. They turn orange when they ripen. 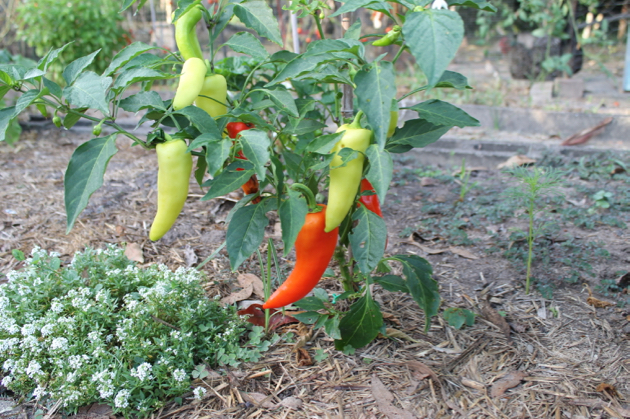 I've been busy with the library talks over the past two weeks and have the last two this week at Caloundra and Maroochydore. It's been a real pleasure to meet so many people interested in creating a simple Christmas for their families. I've noticed a real change this year in the number of people coming along to the talks and the enthusiasm they've taken on their various life changes. Mindsets are shifting and that has to be a good thing. I've taken Maggie the rabbit with me to the talks. She travels inside a calico bag and rides in my red shopping trolley then sits on the table during the talks. She's version 3 now; I changed the shoe laces on her boots from embroidery cotton to hemp string. I've decided to make another one before Christmas for another little girl I know so during this week, I'll gather my materials and then sew and dress her next week. I'm looking forward to going through the process again. I'll take photos so you can see her. 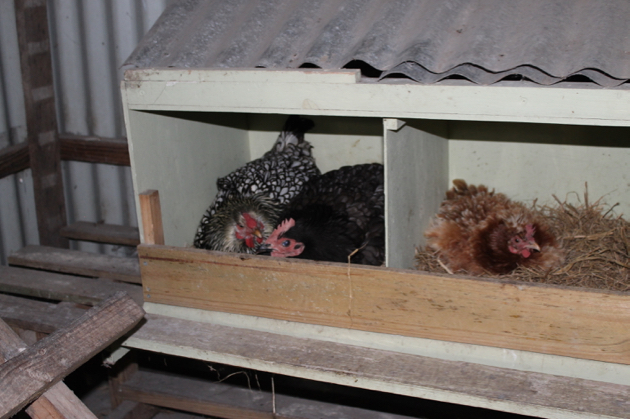 Meanwhile, out in the chook house, the girls are diligently sitting on eggs and refuse to be moved. These are three breeds we won't keep again because of their tendency to brood - Australorps, Wyandottes and this particular Frizzle, which I think is a Rhode Island Red cross. They're wonderful if you intend to raise your own chooks but not so wonderful if you don't. 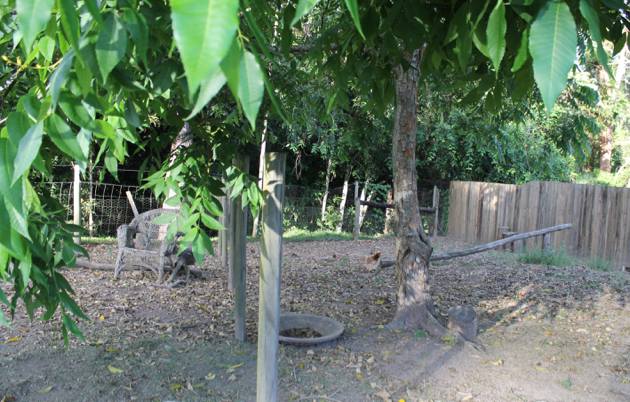 Outside in our backyard, the hot weather is taking its toll on our vegetable garden and, as usual, there are broody chickens sitting on eggs that will never hatch. The cucumbers have finished and been pulled out, blight has taken hold of the Rapunzel tomatoes, the lettuce in the ground has all bolted to seed in the heat and the flat leaf parsley is forming flowers. But on the other hand, the first of the rosellas are on the bushes, chillies and capsicums are growing like wild fire and the raspberries canes have reached the top of the trellis. And as usual, the rosemary, sage, curly parsley, Welsh onions, comfrey, oregano and kale are all loving the heat and growing strong. There are more than enough blueberries and passionfruit too, they're not quite ready to pick yet, but it won't be long. 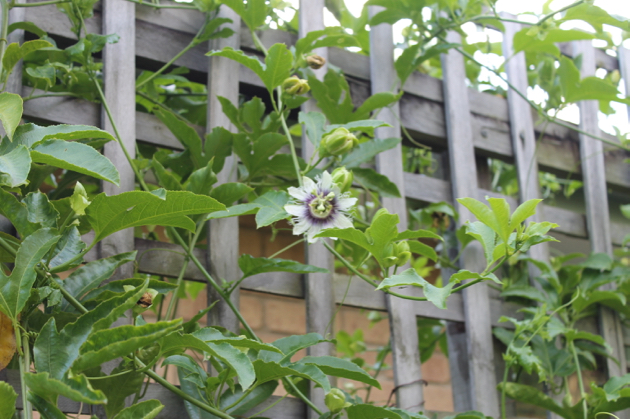 Passionfruit above and raspberries below. 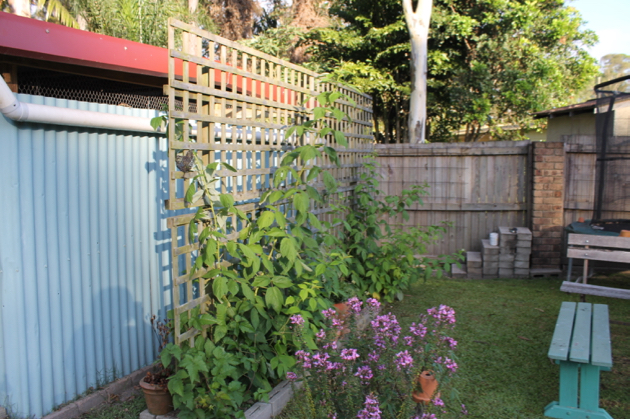 I'm also caring for a trough of baby lettuce in the bush house. When our lettuce go to seed in summer, these troughs keep us going for another six weeks. They only get a couple of hours of sun in the early morning, the rest of the day they're under 80 percent shadecloth. They're a handy crop to have in summer and instead of buying lettuce, I just go outside with my scissors and cut a bowl full of baby leaves. 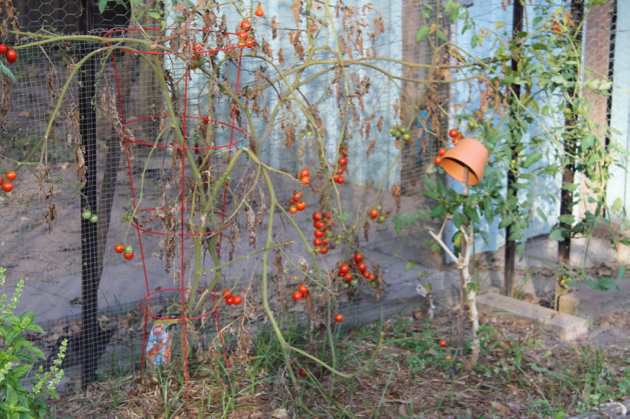 As soon as these tomatoes are picked, we'll rip out the blight effected vines and let the soil rest for a few months. 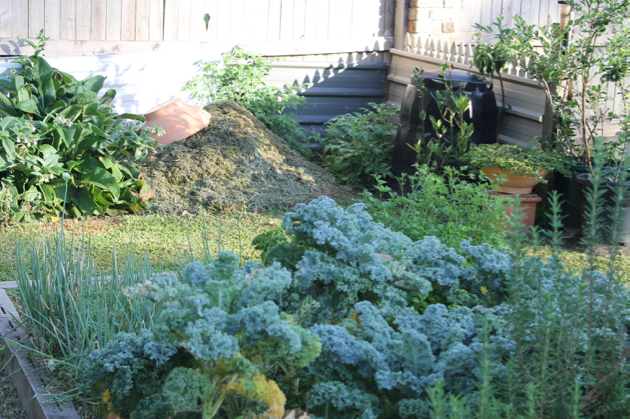 Nothing can kill this kale. It will go on and on over summer and still be there in winter. It happily grows alongside the herbs. 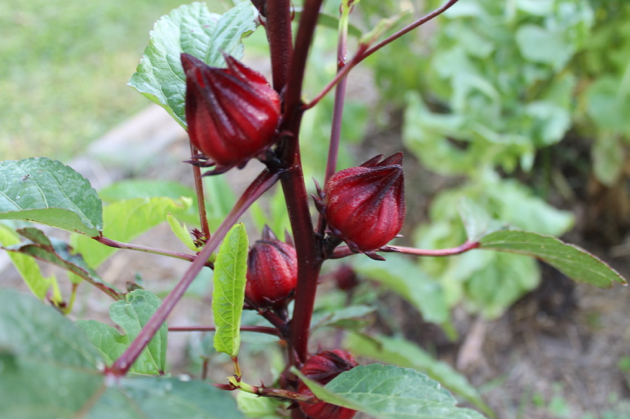 The rosellas are flowering but still have a long way to go before we have enough of them for jam, cordial and tea.

After Thursday, I have no engagements, no deadlines, no articles to write. I'm a free agent for a couple of months and I'm looking forward to that a lot. I have a few projects to make, some gardening to do and a little bit of cleaning but apart from that I'll be relaxing along with the rest of you over the summer holidays. I won't write the blog for a couple of weeks over Christmas but will be here when I can be until then.  I hope you're looking forward to the holidays too, and if you're in a colder climate, that you've got your fires burning. How I envy you that time you'll have in front of your fire. But we'll be sitting here clinking our iced drinks, knitting with feet up and watching the Boxing Day cricket test. (Hello Sue.) Good times!