We had some serious pruning to do last week. Our oldest lemon tree, a Eureka which is about 17 years old, had sap seeping from the trunk, numerous insect and fungal problems and was overgrown. The middle of the tree was too lush and one side of it was so out of control and laden with lemons, almost the entire side of the tree was resting on the top of the chicken coop.  Sorry, I didn't take a photo of it before it was pruned. 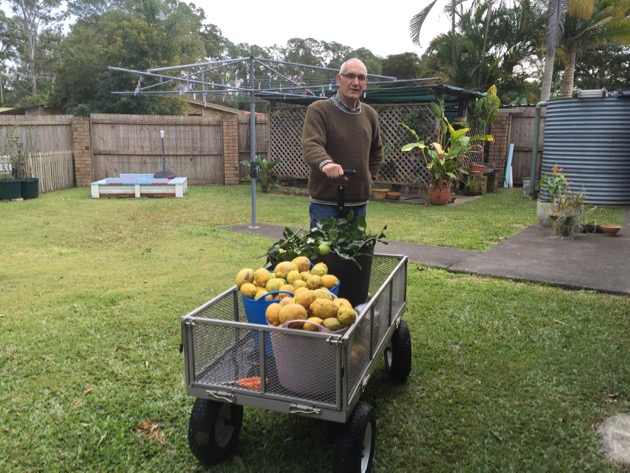 All these lemons will be juiced this week and the juice frozen in plastic bottles to make cordial in summer.

Most fruit trees need to have sunlight filtering into the middle of the tree. When the tree is too bushy, it blocks that light and you'll get fewer fruit. We like to keep our trees at a certain height too so we can easily harvest crops every year. But this tree seems to have escaped that treatment and it was suffering. Our tree is about 3 metres high, which is about average for the Eureka, but it's okay to prune down to a more manageable size, and that is what we should have been doing the past few years. 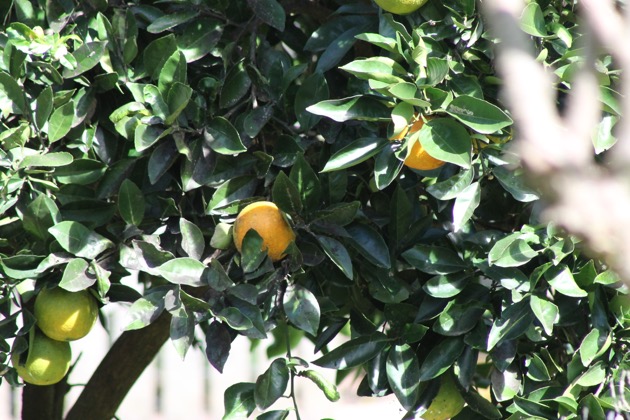 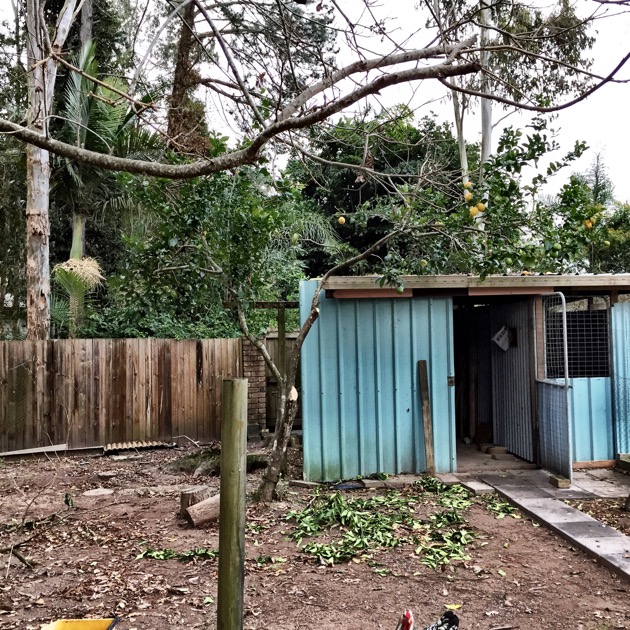 Above: the pruned lemon tree now has three main branches forming a vase shape. If it survives the pruning, next year we'll reduce it in size. After that we should have our healthy tree back producing delicious Eureka lemons for our food and drinks for the next ten years. 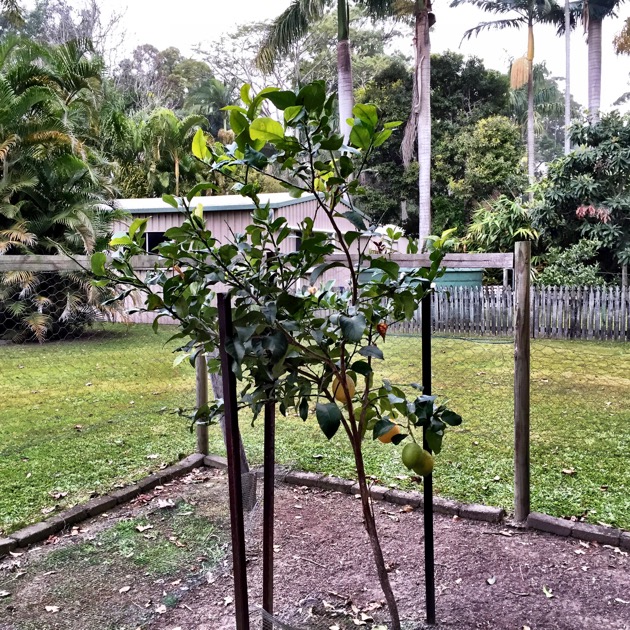 This is our two year old backup tree - another Eureka lemon. It's got it's first crop of six lemons on now but in spring and summer, I expect it to put on a lot of growth and to produce at least 20 - 30 lemons next year.

The best time to prune citrus is after fruiting and before the new flowers start forming. It's best to do a small amount or pruning every year so you don't lose too much of the tree at one time and continue getting a harvest.  But we needed drastic action and have a two year old backup tree just in case this tree doesn't survive. I think if we didn't take this drastic action it would have died a slow death anyway.

Hanno harvested the lemons and started by reducing the branches in the middle of the tree. The ones he chose to take out were those that were growing inward, those that touched other branches, and diseased branches. He also looked for the swellings of the gall wasp and cut those out as well. We didn't have time to do it last week, but today the tree will be sprayed with organic horticultural oil and given a bucket of seaweed concentrate.  The oil is to kill of the nymphs of the green shield beetle. The mature beetles have been biting into some of the small forming fruit and and leaving a brown dry patch when the lemon matures.  The seaweed concentrate is to help with the shock of such a drastic pruning.  When we see new growth forming, we'll apply organic fertiliser. 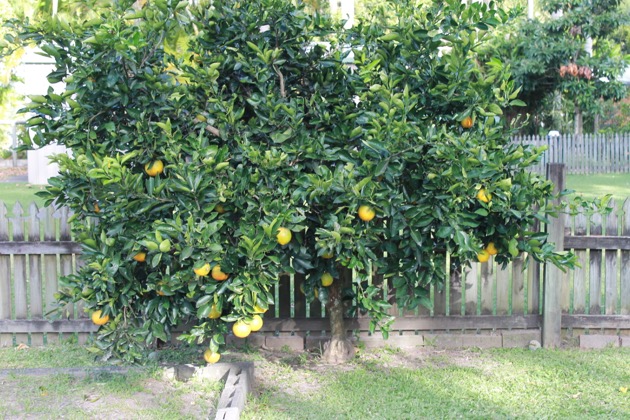 Above is another one of our citrus trees. It's a ten year old Washington Navel orange, one of two in the backyard.  Every year, as regular as clockwork, this tree produces the most delicious oranges I've ever tasted. They're an excellent eating orange and very juicy too. Hanno can't eat too many oranges so in addition to the oranges I ate this year, he squeezed a glass of orange juice for me every morning and brought it in as I was writing the book. :- )

We finished picking these oranges last week and now have the last six sitting in the fruit bowl. This week this tree will be pruned too, but it won't be a drastic prune like the lemon. This tree will have a branch removed in the middle of the tree - it's rubbing up against another branch and it will let more light in. It's a good idea to check the graft too and if there are any shoots below the graft, clip them off. We'll look for the tell-tale deformity the gall wasp leaves behind and cut those out too and finish off by raising the skirt of the tree. That just means that some of the lower branches will be cut off so the tree's lower branches are higher off the ground.  If you can see the top horizontal brace on the timber fence behind it, the lower branches will sit level with that when the pruning is finished. When we do that, it's simply a matter of giving it a bucket of seaweed concentrate, some nitrogen fertiliser, sulphate of potash (all organic) and to mulch around the base of the tree to stop those grass runners robbing the tree of the fertiliser.

Citrus are such a productive tree and all they need is warmish weather, sun, a good feeding program  once a season and some pruning as needed, and you'll have the best organic fruit available. It's a good feeling to be able to walk outside and pick fruit and it doesn't take a lot of work. If you have the climate and space, I encourage you to try growing your favourite citrus.