Down to Earth in the Women's Weekly

We had a bit of excitement here last week, I was interviewed for Women's Weekly magazine. They wanted photos to go with the interview so they sent along photographer Russell Shakespeare and hair and makeup stylist Tania Travers. To tell you the truth, I was dreading the photo shoot but Russell and Tania were such lovely people, I ended up enjoying it.
Even though I had to hold onto a chicken for 20 minutes. 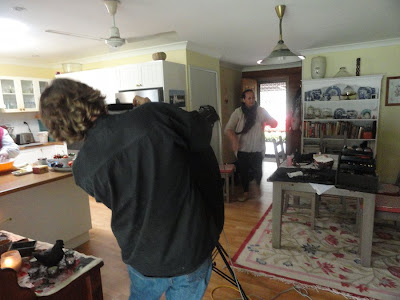 Russell setting up the equipment in the kitchen.
We got the chicken photos - with Lulubelle and Martha, as well as some other photos in the garden and inside the house. We only had a couple of days notice they were coming, and those were the days I was at the Neighbourhood Centre, so instead of having a big cleanup, they saw the house and garden as it usually is - a real working home that is productive and well and truly used. 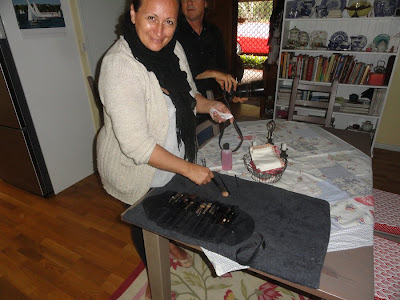 The lovely Tania folding up her makeup kit.
For those readers who live in other countries, the Women's Weekly is an iconic Australian magazine, established in the 1930s, and is the best selling magazine in Australia. It features news about women, with articles about craft, cooking, family, home and fashion. I grew up with my mother and grandmother reading the Weekly. It was a weekly publication then and you could always find the current copy in our home, and in the homes of all my friends. It was part of growing up in Australia; still is, I guess.
It's exciting to see the magazine reaching out to other media, like blogs. Hopefully it will provide a link to people who may never have heard about simple living, or if they have, know little about it. I have written quite a bit recently about how I believe change is happening, this is part of it. The idea of cutting back, slowing down and making productive homes is slowly seeping into the mainstream; this will probably give it a boost. And if the Women's Weekly readers use the link to this blog, not only will they read about Hanno and me, they'll find you too. They'll find the women-friendly world of blogs and that has to be a good thing, for us and them.
SHARE:
Written by rhonda jean