In his books, the late John Seymour tells us that in addition to the many foods found in fields and pastures, like rabbits, berries, nuts and fruit, some weeds are also edible.  In the UK, elder trees grow in the wild, are often thought of as weeds, but the berries and flowers are collected to make drinks and relish.  They're not common in Queensland but we have an elder plant and yesterday I pruned it. 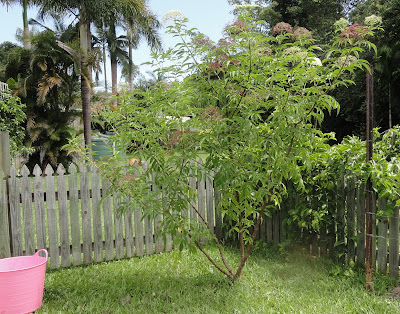 I have never seen an elderberry plant in a plant nursery here and I was surprised to see one being sold, about a year ago, at our local organic co-op shop.  Sitting in there among the unusual herbs they generally sell, I picked it up when I saw the label and brought it home thinking I had found a rare, fragile jewel in a six inch pot.  Well, a year later, I know it's a jewel, but fragile, it is not.  I thought it would take years to grow, and definitely a long time to flower and set fruit, but I didn't care, the thought of elder cordial and champagne kept me going.  A year later this rare and fragile jewel is taller than me and has been covered in flowers for the past six months.
The only thing that disappoints me is that so far it's not set fruit.  There are many flower heads but they just die without setting the dark red berries I was hoping for.  Maybe over our winter, when the weather is much cooler, we'll be lucky.  Then I'll make red elderberry wine about which John Seymour wrote: "Elderberry wine is one of the kings of country wines - it matures well and can almost pass for a claret after 3 or 4 years in the bottle." 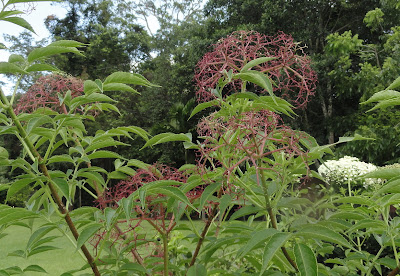 When the flowers fade, these reddish-purple skeletons are left.  They're very attractive but I'd prefer the berries.
In the meantime, when I have a bit more time, I'll make the cordial and champagne, which only needs the flowers.  The secret to a good elder cordial, according to John, is to pick the flowers on a hot day, from high up in the tree, and don't put too many flowers into the mix.  I cut our plant right back yesterday, it's still taller than me but I reckon in a few months those flowers, and hopefully some berries, will be just right for picking.
John Seymour's Elder Champagne
12 heads of elderflowers in full bloom and scent, picked on a hot day
1½ lbs|0.7kg sugar - white sugar is best
1 lemon
2 tablespoons wine vinegar
Put the blooms in a bowl with the juice of a lemon.  Cut up the rind of the lemon and put that in (no pith).  Add the sugar, vinegar, one gallon|4 litres water [cover with muslin] and leave for 24 hours.  Strain liquid into bottles, cork, leave for a fortnight and drink the following week.
I also have Hugh Fernley Whittingstall's recipe and he leaves his  mix until he sees it's fermenting, then he strains it into bottles.
All this talk about fermented drinks - I'm going to start another ginger beer plant today.  Ginger beer, here we come.  Who is making fermented drinks here?  Who is scared of doing it?  Is anyone making elder drinks?
SHARE:
Written by rhonda jean